When to Worry About Stinging Insects in Maryland

Home > Helpful Articles > When To Worry About Stinging Insects In Maryland

You would probably think that summer would be the worst time of year for stinging insects, but the season to worry the most about being stung by a wasp or hornet is actually in the fall. When the temperatures start to drop, those stinging pests sense it, even though it may be the first time they have ever experienced the approach of winter. Somehow, they instinctively know that it is time to work hard and take steps to preserve their species. No one has to tell them that food resources are going to disappear or that the temperatures are going to drop low enough to freeze them to death. They just know it. And this causes them to be much busier in the fall, sort of like a squirrel storing nuts away for the long winter months, only different.

Have you noticed that every time you have a cookout in the fall, stinging pests seem to show up? Have you seen them appear when someone opens a soda can? Have you watched them buzzing around your trash receptacles, even in the fall? You may be wondering why this is. It is actually because they're looking for carbohydrates to feed the newly developed female reproductives. These females will be the queens of the new nests once winter has passed, and they need to be fattened up so they'll have enough stored energy to survive the winter. Sadly, all of the worker wasps who are busily working to feed those queens will not live to see those new nests in the spring. When the first hard frost comes, they will freeze and die off. Only the female reproductives survive to see the next spring. But when the spring arrives, the cycle will start all over.

Along with having wasps invade areas where sugary drinks are being consumed and tasty carb-filled meats are being feasted on, you'll also likely see large female reproductives buzzing around your eaves and exploring your siding for a place to overwinter. If those queens find a spot to hide in, they'll settle into a low energy state and wait for winter to pass, shielded by the building materials of your home. Then when spring arrives, they will emerge and begin looking for a place to establish their nests. And they may choose your home as the perfect place to do so. Fall is an important time of year to have pest treatments applied to prevent overwintering wasps from surviving in your home for the winter. That is why we include this service as part of our Preferred Care Plus year-round service plan! 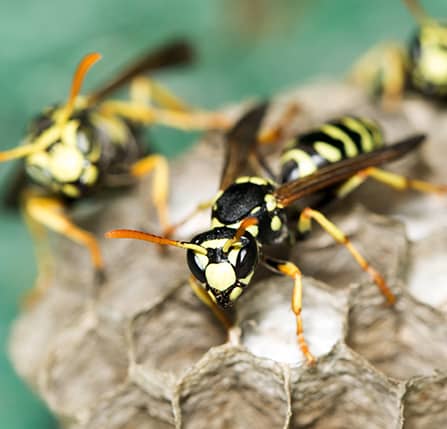 In our service area, we have several stinging insect species that can present a problem for our customers. Three of the most common are Eastern cicada killers, European paper wasps, and yellowjackets. We provide nest removal and treatments that address these insects, but there are a few things homeowners should know, especially in regards to the behavior of these insects in the fall.

Plentiful and painful, European paper wasps become more aggressive in the fall as they prepare their new queens for overwintering. This preparation will bring them into contact with people more often as they travel back and forth from their nest. They'll also go wherever they can find sweets or meats and will also be drawn to sweet perfumes, which means they will be drawn to humans and their homes.

The nests of European paper wasps are aerial and can be found hanging under rooflines, attached to rafters, stuck in the corner of windows, and other locations that are sheltered from heavy rain. These nests will be grey, orb-shaped, and appear like they’re made of a paper-like material, hence their name. Be aware that the paper wasps inside these developed nests are going to be much more defensive and aggressive this time of year, even though these wasps don't reuse old nests. Therefore, it is important to take caution around paper wasp nests during the fall.

These wasps are aggressive all year long, but their desperate search for food at the end of fall to feed the queens can make them more of a threat. Like European paper wasps, yellowjackets feed on sweets and meats, so you can expect to see these pests showing up at tailgate parties or cookouts in the fall. To deter yellowjackets, make sure you keep sweet drinks in cups that have a cover and refrain from leaving meat exposed, especially sweet BBQ meats.

Yellowjackets make aerial both nests and ground nests, so you're going to have to look high and low in order to protect yourself from unwanted contact with them. These stinging insects will also establish their nests in wall and floor voids within man-made structures. If they do this in your home, they can become a real pain. If these pests take up residence in your home for the winter, The warmth of your home could allow some of those yellowjackets to make it through the winter and grow the nest in your home larger and larger, despite the cold. If they do, you could be dealing with a super nest in your home by the time spring rolls back around. But this depends on whether or not they have access to food resources. Yellowjackets don't get into pantries and kitchens and invade our food sources like ants, cockroaches, and many other insects do, mostly because we don't tolerate them invading our common areas and swat them away before they have a chance. But, if they come across stored foods in your attic space, garage, or other secluded location in your home, they may find what they need to survive.

These wasps are different from the social wasps we've discussed so far. Eastern cicada killers may look scary because of their large size, but they aren't much of a threat to us. Male cicada killers don’t have the ability to sting and female cicada killers have no interest in stinging humans at all as they are fairly docile in nature. Stings from Eastern cicada killers usually only occur when these females are stepped on. In fact, these wasps don’t even have nest-protecting instincts so you’re unlikely to have problems with them, even if you are in close proximity to their nest! Though these wasps typically aren’t considered a danger to humans, they are considered lawn pests and their burrowing activities can be quite bothersome. They're also terrible nuisance pests because of how frightening they look and the fear they can cause homeowners.

The most important thing to know when dealing with Eastern cicada killers is that pesticides are not a solution for removing these wasps. If you manage to kill the wasps that are infesting your property in the fall using this method, you will be doing nothing to prevent being reinfested in the spring. Whatever makes your yard attractive to these stinging insects must be addressed in order to break the cycle of infestation and prevent them from returning to your property to start the cycle all over again.

What Maryland Homeowners Should Do About Stinging Insects

The best way to deal with wasps and wasp nest removal is to hire an educated and experienced pest control professional. Our pest management professionals will guide you toward a comprehensive solution that will help you maintain a yard that is resistant to wasp infestations!

“ I have been so thrilled with American Pest. The technicians seem far more knowledgeable than other companies we've dealt with.

Find out what our customers are saying. Click links to read or leave a review.

“ The service technician was punctual, courteous, and very thorough. He took the time to explain each step in the process to treat our home. And, the services have resulted in a reduction/near elimination of pests in and around our home.”

“ I called American Pest because of an ant problem but they wound up treating so much more. Great conversation with the main office and the tech who came to the house was incredibly punctual, courteous, extremely knowledgeable/excited about his work. Happy to say I no longer share the house with ants or any other insects!”

“ My service technician is excellent! He is professional, knowledgeable, and consistently arrives on time. I know my home is in good hands with American Pest.”

We align with the best, to bring you the best.

How To Keep Wasps Away From Your Washington D.C. Yard

How To Keep Wasps Away From Your Washington D.C. Yard

How Dangerous Are Wasps In Maryland?

How Dangerous Are Wasps In Maryland?

Some pests are so harmless that you almost feel bad for getting rid of them. Wasps, on the other hand, only cause relief when they’re gone. S...

Keeping your yard a safe and pleasant place to spend time, free of wasps and hornets, doesn’t just happen by itself. It takes thought and act...

Fill out the form and recieve feedback in less than 5 minutes. For immediate service please call.